A liganda is a large iron object (up to 180 cm high) in the form of a spearhead that has been used as primitive money in Central Africa until the beginning of the colonial period.

The term "primitive money" describes a means of payment that stands in between pure barter (payment is done in kind) and monetary trade (payment is done in "modern" money). According to Einzig it can be defined as "a unit or object conforming to a reasonable degree to some standard of uniformity, which is employed for reckoning or for making a large proposition of the payments customary in the community concerned, and which is accepted in payment largely with the intention of employing it for making payments". [1] The discrimination between "primitive" and "modern" money is then a matter of further standardisation, "(...) all metallic currencies which do not bear a seal or insignia implying a guarantee of weight and fineness by a State authority are primitive". [2] A piece of primitive money, even if standardised to a large extent, remains an individual object (that may be scrutinised by the traders) rather than mere symbol for an accounting unit. It is therefore not surprising that several kinds of primitive money have acquired a large spiritual value exceeding the material one, such that their usage was restricted to transactions that superficially resemble ordinary trade but rather serve a social purpose. Such "ceremonial payments" comprise bridal money, fines for homicide and other formal obligations and dues to the community.

Metallic primitive money can take on the simple form of a bar that is traded according to its weight and size. In Western and Central Africa the metals used are mainly iron (e.g. the "boloko" or "tajere" of today's Nigeria) and copper (e.g. the crosses of the Luba in today's D.R. Congo). On the other hand, a piece of primitive money may have the form of an object of daily use, that has been altered in size and design such that it is readily recognised as a means of payment and no longer suitable for its original purpose. Most prominent among those types of objects are hoes and all sorts of weapons: spears, lances, axes, knives etc. While the metal bars are used in everyday trade, the other types are often restricted to ceremonial payments. This applies in particular to such a highly elaborate object as a liganda.

The production of the liganda currency is ascribed to the ethnical groups of the Lombo [LDO], the So [SOC], and the Poke [POF], which all belong to the Kele [KHY] language family (with the 3-letter language codes of ISO-639). In the references of the early 20th century they were referred to as the Turumba and the Topoke. They all settle along the rivers Congo and Lomami, in the region of present day's city of Kisangani.

The name "liganda" is not unique for spearhead currency. Other names related to this type of objects are "dihunga", "ngbele" or "ndoa". One can assume that the various names refer to spearhead currencies in different languages rather than to different types of spearheads. However, neither the languages nor the original meaning of the words are known, not even if the spelling is more or less correct (neither if the word originally is a singular or a plural).
The root "ganda" could refer to the Ganda people settling in the Great Lakes region, who have inherited their name to today's country of Uganda (which in kiSwahili simply means "land of the Ganda"). So the word "liganda" could mean something like "object from the Ganda", as the spearheads may have arrived at the coastal areas through trade between the Kele and the peoples in between, like the Ganda. Just speculating...
The root of the word "ngbele" (pronounced 'n-bele' with an implosive b) appears close to "ekpele" (pronounced 'e-pele' with an implosive p), the collective name given to all iron currencies by the Beti in Western Central Africa, a word that has even survived until recently as the former currency name of Equatorial Guinea. So it could simply mean "iron currency".

About the usage and value of a liganda there are only accounts from European travellers, which underline a fact that it was ceremonial money, but should maybe be taken with a grain of salt as the reports were certainly "exoticised" in order to sell well. In Quiggin we find: "The 'liganda' or 'ngbele' made by the Turumba (or Barumbu) below Stanley Falls (...) is the currency between the Congo and the Lomami. This is an enormous spearhead, over 5 feet 6 inches long and weighing 4½ pounds. Cumbrous though these are, they are still in use among the neighbouring tribes, though mainly for 'bride-price' and for the purchase of canoes. They have a definite value according to their size, being worth from 10 to 25 'shoka', 100 to 250 'mitako', 2½ to 5 francs, or 2½s to 5s in English money. (...) The Topoke (or Tofoke) of the Lomami also use this spearhead ('ndoa') currency. Thirty will buy a male slave and 40 to 50 might buy a female, though a purchaser may have to go up to 100." (Note: the last group of values quoted refers to a bridal price for a free woman rather than a 'purchase'.) [3,4]


Ballarini adds some information about the manufacturing of a liganda: "(...) The Topoke were very able smiths and soldered the two sheets together. When they had formed it into the shape they wanted, they made a series of incisions with a chisel along the entire length of the left-hand side parallel to the edge, and repeated this on the opposite side to make both sides equal. They finished off the lower part with a cylindrical extension into which a wooden staff could be inserted, so that the currency could be driven into the ground." [5] 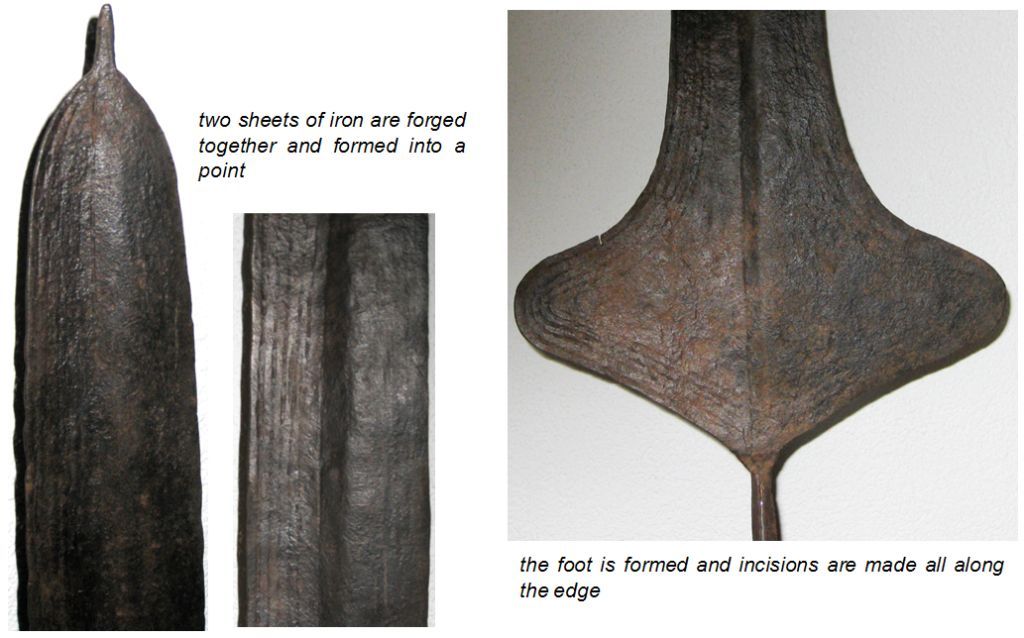